What I learned from my puppy about leadership and self-awareness! 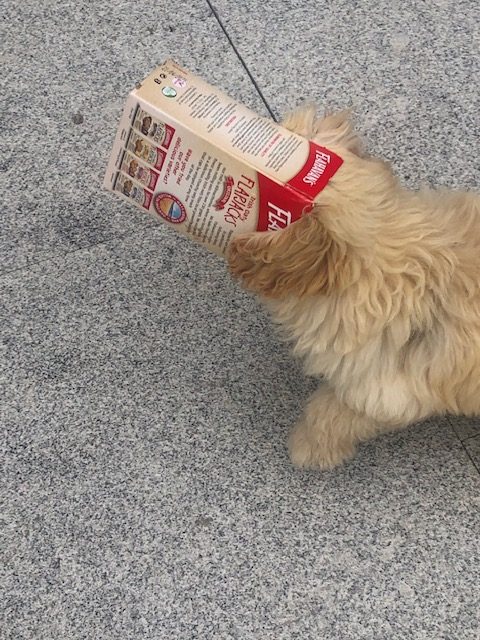 When conceiving this series of blogs, a number of themes came to mind, one of them being what we can learn from animals at this time. We happened to get a puppy in August, so this blog wrote itself, based on the first-hand joys and tribulations of having this new member of our family. This is the 3rd blog of the series ‘Dancing with Complexity’.

Ten years ago, our eldest started a petition to get a dog. We resisted. Ten years on amid Covid, we brought what has now been termed a ‘Lockdown Puppy’ into our lives. Well, if not now, then never?

It took us ten years to get our heads around getting a dog, knowing (as we thought) the commitment. We had no idea! After two months of him calling me between 5:30 and 6 am for play-time, I was exhausted and realised that this was closer to having a new baby in the house than I ever imagined, but the issue of early mornings was not the biggest challenge.

From the outset, Charlie did not like restrictions. We started crate training early, to limit potential damage. We had moved house earlier in the year, with some new furniture, which was not compatible with a teething puppy. We attempted to take it slowly, allowing him build up confidence with the crate door closed, but he routinely ‘lost the plot’, barking and howling as he tried to dig his way out. You might imagine this happening if he was left on his own for three hours. I’m afraid such behaviour resulted from even a 3-minute training session, while I was in the room. We got help from the DSPCA, a professional dog-trainer, the breeder and every dog owner we knew to try and crack it. Here’s what I learnt about me, him and little bit of leadership along the way.

Taking Multiple Perspectives
One professional suggested that Charlie had separation anxiety and we needed to take it really gently with him. I shouldn’t leave him on his own for longer than he was comfortable with (which at this point was less than a minute – so essentially I was trapped in the kitchen, office or garden, where he could do minimal damage, until he was ready).

Another professional said that he essentially had a bad temper. She watched him in action mid-tantrum and said it was time for tough-love.

My first learning here was a reminder that two different professionals can have diametrically opposed views on the same issue, with opposite suggested interventions. Getting different perspectives is invaluable!

Who’s feeling the heat?
Anyone I spoke with about getting a dog said ‘remember, you will end up doing all the work’. Despite all the assurances from the kids, once they went back to school in September (Charlie was two weeks in our home at this point), it essentially did fall to me. Who was feeling the heat? Definitely me. Who should have been feeling the heat? Obviously, those who actually wanted the dog. Having made some adjustments we managed to balance this out somewhat, but given I was working from home full-time, there is a certain reality to this and therefore a desire by me ‘to get the dog sorted’.

So who actually got sorted?
You might have guessed. This was where the self-awareness came in.

Overdoing the empathy
Growing up, I was very matter of fact and driven and honestly probably underdid the empathy. Over time, this has swung the other direction, particularly since training as a coach. When I was told the dog may have separation anxiety, well the empathy amped up. The dog’s strategy worked. A number of things contributed to resolving the situation, but addressing my own part of this issue was certainly one element.

Independence and freedom
I know none of us likes being constrained and Charlie certainly didn’t. However, as long as he got his freedom, I didn’t get mine and I ended up being trapped.

It brought me back to my childhood. When I was 5 years of age in junior infants, in a country school in Co. Cork, I asked the teacher one day if I could go to the toilet (which required a trip to another building – an out-house in fact, in the yard, not glamorous). The teacher didn’t allow me to leave the room (no doubt she had good reason?) but I took it upon myself to resolve the situation. I somehow managed to leave the classroom and the school, cross a road, walk through a graveyard, across a field and a further half-mile walk up a country road until I got to my second next-door-neighbour’s house. At this point their cross guard-dogs stopped me in my tracks. A lovely county council worker called Pat White stopped his lorry to help, as he spotted a 5-year old, on her own, screaming at the side of the road in fear of the dogs. This kind gentleman brought me, in what I considered to be his huge lorry, back to my mother, who was thankfully home, two doors down.

For as long as I remember, independence has been important to me. Charlie’s arrival was a stark reminder of this. I know I got a shock when my first daughter was born at how I couldn’t be as independent as before, but a dog taking away my ability to leave the house – that took the biscuit!

Acknowledging at this point that I was over-doing the empathy and that I needed to prioritise my independence (or else I would lose the plot!), I had made progress, but unfortunately Charlie had not.

Expect the unexpected and spot the opportunities
Just when things couldn’t get much more difficult, Charlie’s curiosity scuppered his antics. He had a habit of chasing bees until a big bumble bee stung him on his rear. In his attempt to bite at the location of the sting, he chewed his tail raw. Picture me finishing up a conference call, delighted at how quiet my puppy has been, to find fluff and blood on the floor. Vet visit, steroid cream and antihistamines all followed as well as a great big cone around his head to prevent further self-harm. We had a sleepy pup on our hands for about a week, so acknowledging that, we tried to cultivate the behaviours we needed for us to co-exist happily together, while he didn’t have the energy to battle against us. Now I am not advocating antihistamines as a support mechanism when training your dog, but we did capitalise on the opportunity presented and we now have a puppy who we wake in the morning and who doesn’t complain too much when left in the crate. Other challenges are obviously presenting as time goes on (those could be the subject of another blog!) but I have regained much of my valued independence.

Having learnt a lot about him and me and even some leadership lessons thrown in, the irony of course was that this issue was solved as Dublin went back into lock-down, but I certainly won’t dwell on this!

If you would like to hear more from us, why not try our November Podcast: ‘Dancing with Complexity’. This podcast introduces this series of blogs and gives you a flavour of others yet to come.